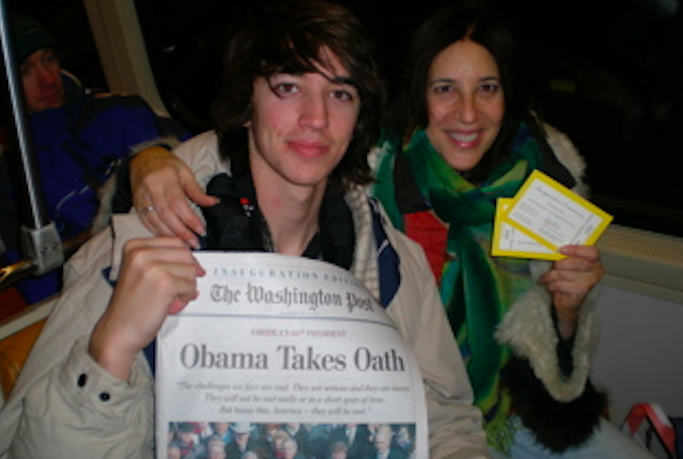 Below is an essay I wrote while sitting in the Baltimore airport after attending President Barack Obama’s inauguration with my son. I share it in the hopes that you’ll not only vote (if you’re in the U.S.), but to encourage you to involve your children as you educate yourself about the various propositions, ballot initiatives and State and Congressional races. It matters.

Because the truth is, even as we’re convincing our kids to put on their shoes or do their homework, we’re also doing something else: We’re hopefully guiding them toward become an informed, engaged citizen as they move into their adult life. By showing your children what it looks like to be an active, engaged citizen, you are helping to safeguard our beautiful, fragile planet.

Up at 5:30 am (that’s 2:30 in the morning, California time, where our bodies still think we are.) We’re on the train by 6:00 a.m. amidst throngs of people all going to the same place, for the same reason.

We get off the train near the National Mall with throngs of others, the light in the sky shifting from a dull grey to a hint of blue and rose. The atmosphere is electric already; people of every age, shape, color and demographic all having pushed through some obstacle—or many of them—to be here for what they feel is a once in a lifetime experience.

My son and I wait for several hours in the tunnel on 3rd Street surrounded by thousands of fellow adventurers, sharing stories with whomever we’re beside for those few moments until the movement of the crowd separates us and we find ourselves with a whole new group of friends. That’s how it goes. Helping someone find a lost glove. Giving our hand warmers to the teenage girl who wasn’t quite prepared for twenty degrees. Sharing with the young man from New Orleans or the older ladies from Memphis why, despite the crowd and colds, we each felt we should come.

The day unfolds magically. We eventually emerge through security, believing we’ll now be able to move onto the Mall, but instead we’re told we have to walk 15 blocks to another entry point. Finally, five or six hours after setting out this morning, we find “our spot” and the people within our fifteen feet radius become our family for the next few hours.

The night Obama won the election, my son looked at me after his acceptance speech and said, “We have to go.” As a political junkie and a kid passionate about history and international relations, I saw this as a chance to stoke his fire.

But a power outage in my neighborhood the night of the election meant that I booked airline tickets sitting in front of someone’s house, stealing internet access with their signal and my laptop. Tickets I held while looking for a better deal disappeared by the time I came back to compare them with my new find. I leapt, and booked flights; it wasn’t until the next day, when I could research the whole thing, that I discovered two interesting things: One, hotels were $500.00 on up and two, you needed tickets to go to an inauguration.

But it turned out to be one of those “leap and the net will appear” experiences. My friend Pamela offered her parents house; her folks picked us up and took care of us like we were their own, until we moved to a friend’s empty apartment in Silver Springs.

So we had our adventure. And now I sit in the Baltimore airport, watching my son chat with a young man who worked for Obama’s campaign in the Asian-American contingent. Across from where they sit are two ladies covered in Obama buttons, hats and scarves. My boy has on his “I Witnessed History” t-shirt. I have on my “I Was There” button.

When my son was little, I used to think that when he got older, parenting would invariably be a lot less fun. I considered the idea of having a teenager as something like a consolation prize; they haven’t actually left home yet, but it’s a lot less sweet than when they’re little boys who run to the door when they hear you come in.

But I have to say, despite the yucky moments and teenage attitude, my son’s adolescence is in many ways the best part of raising him so far. I get to see him discover parts of himself that are just waking up. I get to watch him start exploring what he’s passionate about.

I get to see him turn to the older lady from Saint Louis he’s been standing beside for hours on Inauguration day and give her a big hug as the the crowd goes wild. I get to listen to him discuss Obama’s speech with the history professor from Rhode Island on our airport shuttle. And I get to see the look on his face as I see him listen to the speech of a man he so deeply admires.

Many have said that they went to the inauguration to witness history. As true as that is for me, what I can say even more fervently is that I went to witness my son take one more step along his journey towards becoming the fullest version of who he is meant to be.

I Was There. And it was pretty wonderful.