My Kids Used to Think I Hung the Moon 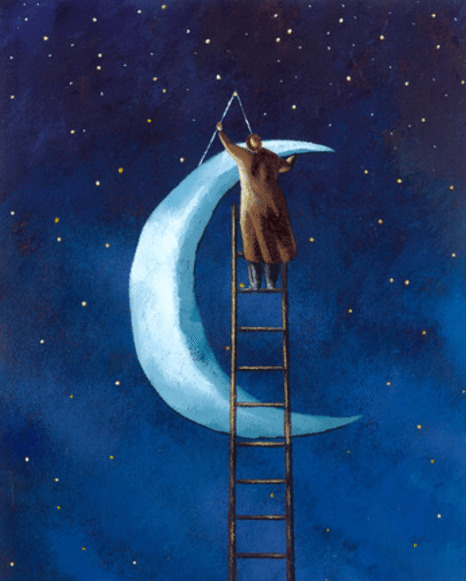 Sometimes when I pick my kids up from school they act like I’ve ruined their day just by showing up. Gone is the toddler phase when they came running to greet me. Now they would rather be with their friends than me. I am hurt because they don’t want to be around me anymore.

I remember the days when I was the oxygen my son could hardly do without. Reunions were dramatic; after being away an hour or two he would leap into my arms before I had barely walked through the door. And then, it changed… as it must. Our children grow, and slowly loosen their grip on us so they can begin the journey of individuating.

One of the biggest lessons we have as parents is to resist the urge to take our children’s behavior personally. It isn’t easy to avoid feeling hurt when they they prefer to hang out with their friends, or when they’d rather be alone in their rooms than with us. But it isn’t personal.

One day, an eleven-year-old boy was in my office explaining how hard it was to see his mother’s face when she picked him up from school. “I know she’s happy to see me and all,” he said, “and I am happy to see her, too. But I wish she wouldn’t be so lovey-dovey around me.”

This young man was trying hard to create more defined boundaries with his mother. Her neediness made him uncomfortable, because as much as he didn’t want to hurt her feelings, he had a developmental imperative to develop a sense of himself as separate from her.

A fourteen-year-old girl told me that she dreaded the days when her mother picked her up from school. “She always asks me questions, wanting every detail about how my day went, how I did in my classes, who I ate lunch with. I don’t want to tell her everything. I want some privacy!”

She and her mother were constantly fighting; as she pulled away, her mother chased her, desperate to restore the connection they once enjoyed.

If we give our children the space to move away from us, they will have less of a need to push us away. I have not only witnessed this with others; it was true in my own parenting life. My son had to pull away to define himself more clearly. Now that he’s his own man, we have a wonderfully close relationship.

Please note: While I encourage you to see your children’s pulling away as normal and healthy rather than as evidence that they no longer love you, I am not suggesting that you withdraw your love and attention. Even when kids appear to be indifferent to our presence, they need us — sometimes, more than ever. Look for opportunities to be with them one on one. Explore a common interest, whip up a new dessert, or just tell jokes. As long as you remain gently present for them, the connection you share will remain strong.

Interested in tuning in to a special series on raising tweens and teens with some of the best and brightest psychologists, researchers, and experts in the field? Find out more here! The Raising Tweens and Teens: Less Drama. More Joy.